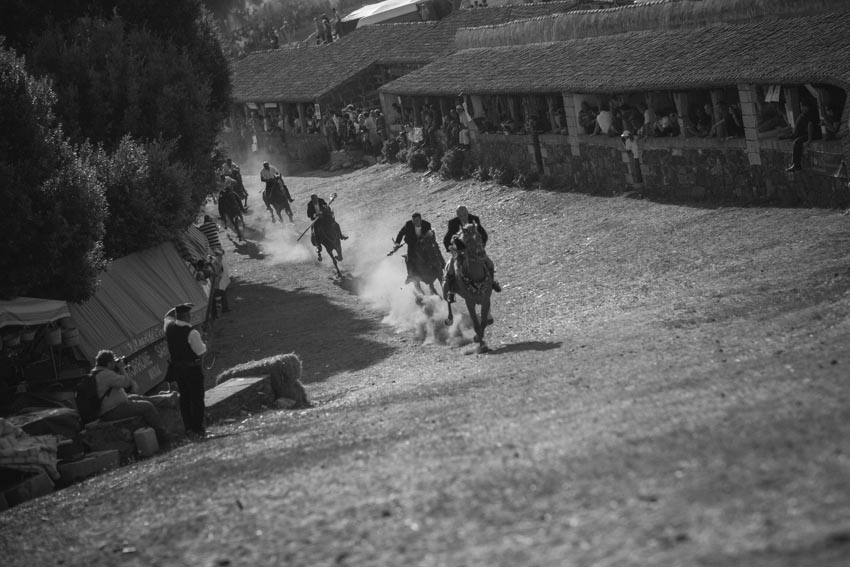 Ardia is an unbridled horse race made in honor of St. Constantine, which takes place every year in Sedilo on the evening of July 6 and is repeated on the morning of the 7th.

It all began with an inclusion in a special register, which content is known only by the priest, and in which them that want to be leader decide to sign up.

Inclusion, takes place in young age, both for passion for horses and a promise done to the saint. Several years pass before being chosen and the choice is made by priest following chronological order of inclusion.

Priest chooses the leader, “Sa prima Pandela”, and he communicates him during the period of an high holiday, St. Anthony, that in Sedilo takes place on 16th January.

The leader chooses in turn other two people, the second and third “pandela” : two trusted and well-respected people that shall acompany him ( that is almost like choosing best man of wedding! ).

Each one of them will have to choose a supply , other two riders , whom shall have the difficoult task to hold off all the riders , so that at departure moment, they shall not overcome leaders.

Their names will be secret until 15th May, Saint Isidor’s day , where during the Mass , the priest does the announcement and the three riders can do their first official exit during procession.

On 29 June, day, Saint Peter and Paul’s day, chief riders officially taste their horses in order to test their preparation.

Only the next day, the other riders too, can officially try the itinerary of Ardia with their horses.

The sunday before religious Holiday, will take place blanks preparation, which will be used by riflemen of Ardia during the ride and that have the task both to warn faithful in the santuary of the arrival of Ardia and to drive horses during the route and each rifleman is invited by the leader.

Religious Holiday begins on 5th July with Mass that in the afternoon is celebrated in the sanctuary.

In the morning, on july 6, the three “pandelas”, all the riders who will take part to the ride and hundred of faithful attend the high mass.
Chief riders will go to the sanctuary on horseback, but with different horses from them they will ride in the evening, to prevent the animals getting raddled or hurt.

During the mass, priest call for the Saint to protect riders during the race and then gives solemn blessing.

In the evening of 6 july, all the riders go to first pandela’s home, in order to go everybody in the Church square, where flags will be delivered and where blessing will be given.

At this point starts procession towards sanctuary , opened by the marching band and led by priest and mayor on horseback, whom will be accompanied by two policemen (the so-called “carabinieri”) in dress uniform.

Once priest got at the beginning of the street ,that will bring till the Church, in “Su fronte mannu”, he gives a second blessing. Riders continue their descent until they reach “su frontigheddu”, where they receive a third blessing. At this point, priest , mayor and policeman go to the Church, while horses ,seething, wait for time of departure.

Riflemen fire blanks to warn the chief rider of priest’s and mayor’s coming to the Church, and this shall be the signal that “Ardia” can start. From now on all eyes will be upon first “pandela”, who at any time can decide to start.

The moment of starting is exciting both for riders and spectators because it will be a wilde race that will leave all on the edge of their seat.

First “Pandela” decides to start and does the signal to other two to go and he spurs his horse down to the steep heel. Then he will get in the arc in order to reach Church. Behind him, the hundred horses that between powder and the sound of hooves , will try to keep up with him as close as possibile.

Once they get in the Church, will be done some rounds at a walking pace, usually five or seven, always in odd-numbered, the three “pandelas” in each round will stop in front of the Church to make the sign of the cross, the same sign that had led Costantine in the fight against Massenzio taking him to victory.

When the first “pandela” decides , horses will continue their race down by the Church towards “sa muredda”, where will be done some clockwise rounds and the Others in counter-clockwise, by returning to the Church and then wrapping up Ardia.
At the end “pandelas” will take part at the mass of thanksgiving. And after they come back in the village, announced by riflemen and where everyone is waiting for them as winners of a battle.

The next morning (7th july), the race will be repeated with a peaceful and homey atmosphere. In the evening of 7th july takes place procession in honour of Saint Costantine.

Who isn’t able (or cannot )to ride a horse will take part to the “Ardia by foot”. This one has its chief riders and its supply, compared to them of horses race, with the same procedures already described.

Race is held in the same way as that by horse, but it will be a party for all the boys, girls, children, adult and older people that will engage in the race. Atmosphere is calmer than the other race, but equally exciting, particurlarly for those people that will drive the race.